I’m holding my miracle, Rae.  Maybe the elation is because I can breathe again, or maybe it’s because she doesn’t have the third arm we feared she could.  This infant is proof that we all, on some level, crave Life. My baby, the one all saucy and soft, has reminded me of a Love I thought left me on the eleventh floor.

At my staging appointment sixteen months earlier a new hematologist, who would head up my BMT, heard rumors about a twenty-two-year-old coming in with a newborn.  His team rightfully assumed that this youthful beauty would appreciate an appointment with University of Colorado’s Oncofertility team.

That’s a thing?  I feel like  ‘onco’ and ‘fert’ only belong together in a joke.

Right after he manifested my nightmare, yes you’ll need a transplant, I was directed to the floor and wing where all the gutted women go.

How many miscarriages?  How many Folistem injections?  How many sperm collections and tubes of ultrasound gloop?  Tissue boxes peppered on every flat, laminated surface.

“Bone marrow transplants kill all the eggs in your ovaries, because they are meant to kill you.”

Don’t say that ever again, to any woman, ever.

Later at home David and I decide that we enjoy Lucy enough & would like to give her a sibling someday.  We call our nurse practitioner to green-light the (very expensive) treatment.  Two weeks: in two weeks we would collect as many eggs to fertilize as possible.  After that they would start chemo and rob my fertility.

“I have cancer,”  I inform my OB-GYN, the woman who, six weeks prior, delivered my baby.

“Yep, she is great.  I had to stop breastfeeding because the radiation in the PET scans can’t be consumed by babies.  And they said I’d start chemo in two weeks, so I wanted to ween her off as soon as possible.  My boobs hurt, but she loves the formula.”

Also, we are now a robot family now.  Here is my metal cervix for you check.

“Okay, let me know how I can help.  University of Colorado Hospital has an incredible oncofertility team; you’re in great hands.”

You mean their great hands are in me.

With pregnancy hormones still racing around inside, David did the job of a true hero by injecting more of them into my ass cheek, inducing the ovulation of the century.

At night after we put Lucy down David and I began the routine of flushing my trilumen port before confusing my body with fertility drugs.  Wait, we just had a baby, why the hell are we producing all these eggs again?!

First the port: sterilize with the alcohol wipes whose smell still makes me rage-y, inject saline into all three exposed IV lines dangling out of my chest, re-sterlize, cap off so my insides don’t drip out.

Then switch gears from cleaning a dying wife’s hardware to trying to help harvest life from the dying wife.

Fourteen days later, all the ripe, plump eggs trapped in my healing uterus were ready for harvesting.

This is my last chance.

Any babies I hope to meet will leave my body right now.  How is a woman supposed to grieve all of this?  There’s a two-month-old at home, I am still physically recovering from her birth.  There’s a husband here next to me who doesn’t know if one day these embryos will be the only thing left of me.  Inside, tumors are blocking my trachea and impinging my pulmonary structures.

No, God doesn’t exist here.  Not in this room.  This is where women get their insides removed.  This God isn’t one of redemption and restoration and love.  This is a God of barrenness, death, saline, and sharp metal utensils.

“If you weren’t about to have chemo I would encourage you to become an egg donor.  Usually we see twenty—tops.”

Don’t say that ever again.

Six months after my discharge from the BMT, I woke up to pee in the middle of the night.  Which, for someone with a camel bladder, only happened once before—during my pregnancy with Lucy.

This is weird, said the girl still growing back eyelashes.

A PET scan was scheduled to see if remission still wanted me.  They keep those signs on the walls, the ones with babies and a red line through them, because these machines can ruin a fetus.  At least that’s what the waivers say.

You guys, I feel pregnant, I told my nurses and the techs.

They gutted me, they took apart my insides, and froze the pieces.  They said I was empty.  God was on board too!  You are now Barren Claire, just like Barren Rachel and Barren Sarah and the barren survivors of Hiroshima.

At the time of that scan, the one where they inject you with radioactive dye and tell you not to hold your baby for twenty-four hours, Rae was just a sesame seed growing inside me.  Three weeks gestation, but a thousand years of stubborn.

The meds?  How will she survive the meds?  She survived the meds.

The stress?  How will she thrive if my body is still struggling to live?  Doctors warned she would arrive early with low body weight.  She did arrive early–induced. They feared the delivery of her twenty-four-inch-long and 11lbs 4oz frame would put too much stress on my now un-impinged but heavily scarred pulmonary structures.

The scan?  What did it do to her body?  Her fingers and brain?  She survived the scan unscathed, as far as we know.  (But David and I are still waiting for spider webs to start shooting out of her wrists, because she is huge and also a genius.)

Rae is an “anomaly,” and she made my medical records very valuable.

Rae is a miracle.  But MDs don’t like that word.

And I am so thankful to have her.  Thankful for the hours waiting in that wing, on that floor, surrounded by my empty & aching sisters and brothers, because it’s a pain I can pray for now.

I’m thankful for the gutting, because I think maybe it made room for the giant baby who God needed alive.

She loves the color red, and rainbows blow her brains apart.  I pray that her turquoise marble eyes and perfect proportions don’t cause too much trouble later in life.  She dances funky, and eats too fast, and stays a little too long on the sensitive side sometimes, but she is unwavering in her devotion to her friends and family.  Her affection, care, and presence help to heal those around her.

She reminds me so much of Ellen.

Rae, my little lamb, further bolstered my belief in a Good, hard, wild, and loving Shepherd, who dabbles in miracles & obstetrics every once in a while.

So we have 18 frozen babies

and we can’t afford to keep them frozen anymore…

All with Lumpkin blood

It feels like a donation to the Angelic Cause.

Do I get an extra jewel?

How about a book deal?

Because I released 18 of my little beings back to You? 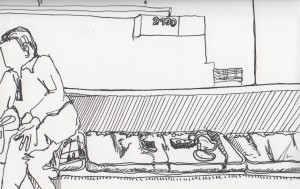 (I drew this while waiting for my eggs to get harvested.  It was too early, and that’s why this man waiting for his wife doesn’t have a face)