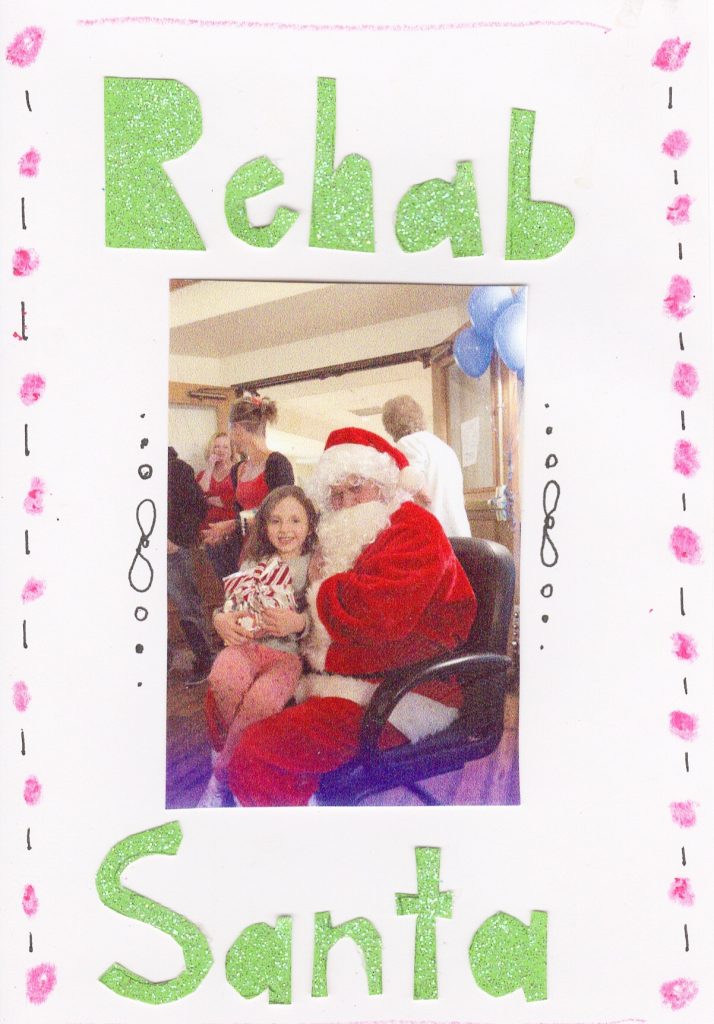 The kids met Santa at my rehab last weekend.  For the first time in over three years we drove the forty minutes from Denver to Parker Valley Hope, my inpatient facility.  I have no other reason to drive down to Parker except that Lex from my outpatient speakers panel said Santa would be there for the Christmas party.

I have four kids ranging in age from six to twenty-one months and not one has ever met Santa.

“Maybe this is the year, babe!”  I tell David.  “And it’d be nice to walk through those glass doors not having just hit rock bottom.”

Tired from a long day, and a little itchy at the prospect of smelling all that Sleepy Time Tea wafting around again, we load into the car.  David holds my hand.  Nobody fought while the fiery winter light smacked all the west-facing facades of the sprawly new builds that rest on the prairie further south than we usually roam.

“Do you remember this?”  I asked him.

There’s so much I remember now.  Ask me to recall very detail of Nell’s birth, the only one sober, and it’s crystal clear.  What did I wear to church on the Sunday our friend’s baby was dedicated?  The white dress with those beige Oxfords and a red scarf.  What were the first words David said to me in bed this morning?  “Hi.”

When parking at a rehab I suggest a spot in a far corner for a number of reasons.  We park between the two white lines and debrief the babies.

“Okay kids.  This is rehab, do you remember what rehab is?”

“This is where people go when they have cancer,” Lucy informs us.

“Close, but no.  That’s a hospital.  Good guess though, babe!  This is where Mama went after Atticus was born to get off all her medicine, and where people go to find their Love.  The people inside are just like you and Daddy and me, they are all just trying to find their New Story.  Some of them may act a little different, so come close to me if anyone makes you uncomfortable.  But I do not think that will happen.”

“Yeah, because nothing bad happens where Santa is,”  Rae Rae chimes in.

“Right.”  I affirm, and I believe she is probably correct.

While someone finishes up a testimonial about how terrific sober living is David, the kids, and I play volleyball on the sandy lot I spiked on all those months ago.  The frozen sand doesn’t feel great in my shearling-lined flats but at least we’re not stuck inside.  They said it would take thirty goddamn minutes, it’s been over an hour! I hear a youngster grumble through his cigarette.

An applause signals the end of the lecture that those newly sober and very raw patients needed, and we march toward the glass doors who welcomed me that one night in late Octoboer, 2014.  They let all the light in and all the light out.

I’ve said it before and I will say it again:  If you haven’t been to rehab you should go.

Lucy stays close because her keen observational skills tell her that there is too much Sleepy Time Tea in the air and the bloodstreams of these humans.  Dotted throughout the beanie-wearers and middle-age women who didn’t used to think beer & wine were big deals I see people wearing visitor lanyards, I go get two for my man and me.

Right there, on that sofa, a teenager held newborn baby Atticus (who turned three this past September).  My mom brought him for a visit on my second night, I think.  Maybe third?  Earlier in the day the girl told me about the abortion she had a few months before.  And then the heroin she started using so she didn’t have to remember the abortion.

“You’d let me hold your baby?”  Tears huddled in the corners of her dull, brown eyes.

Twenty minutes later, after all her tears fell, she handed him back.  I won’t try and type out the thoughts and feelings I presume pumped through her prefrontal cortex.  I’ll just leave you with that Advent image—a  broken teenager and a babe.

“Mama I’m hungry!”  They all whine in unison.  So we hurry back and claim a circular table, add an extra chair because #4KidsIsTooManyKids, and I take the big girls to stand in line with me.

“This is just like at school!”  Lucy exclaims upon seeing the cafeteria trays and hair nets.

“Yep!”  I smile down at her.  Except here you eat way more sugar and coffee because they’re stimulants and your poor brain has no clue how to function free from addictive substances.  In this room is where I learned that I never ever need more than four cups of coffee in an hour again.  Ever.

It’s a BBQ blitz until the carolers arrive and freak Rae out.  Those songs are scary, Mama.  A handful of toddlers and big kids can sense the red suit approaching; they buzz around because—sugar.

There’s a woman who’s asking Atticus too many questions and not registering that “Booga” is his nickname, not my son’s actual name.  Nick has discovered at some point in the last twelve days of sobriety that he actually loves kids.  Like, a lot.  And when Nell motions for him to pick her up his glee momentarily makes me forget to say a prayer over her little body because I am 99% sure she is the first baby he’s held.

When the singing stops a woman in a red sweater informs us that Santa has arrived.

It’s such a good thing they haven’t seen the fancy guy at the Cherry Creek Mall yet.  My children explode.  They surround Santa as he sits on the rehab chairs I sat on with my sore, c-sectioned body.  It’s fucking magic.  The empty fireplace isn’t raging, but the sober smiles on all those parents’ faces warm the big room right up.

This all started with a baby.

I snuck away earlier during dessert to hand a list of all their names, ages, and genders to the business manager, an alumni of the program himself.  Nearly everyone who works at a rehab is themselves in recovery—we know that the 12-steps are a type of voodoo that only works when one stays tethered to the Truth.

We know that rehab and recovery are close as you’ll get to Jesus on this side of Heaven.

The alcoholic-turned-businessman hurries off and wraps up four presents for my four monsters.  Santa calls their four beautiful names and then we decide to head out, bedtime waits for no man.  Hug Amanda, wave to Nick, smile at the smokers flanking the walkway to our SUV.

The last time I left this place I was thinking thoughts so expansive I was sure I had become a superhuman at some point during my week-long stay; maybe that was true.  Because the Secret, the Voodoo, the Gospel they relayed made more sense than any sermon & it changed me forever.  Think resurrection.

We leave behind the beanies and their nurses, the middle-aged women and their rage.  But David and I know that they’re the lucky ones, because God likes to hang out in mangers and inpatient facilities.

The hardest months of my life met me the moment I walked through my front door sober for the first time, but now I knew I wasn’t alone.  I wasn’t even broken.  I was alive, and in rehab we learn we’re allowed to be a human.  We don’t hide our mistakes, obsessions, abuses, psychosis, or self-harm behind the big glass doors because we can see the scars on everyone else.

And the haphazardly applied eyeliner—that’s a signature rehab move.

The secret is that you’re never alone, and you’re not broken (even though you ache), and of course you can hold the baby, and don’t drink that much coffee, and American rehabs singlehandedly keep Sleepy Time Tea in production.

The secret is in remembering what Love looks and sounds and feels and tastes like.

Booga pees his pants on the way home, after they rip open the gifts.  We listen to Lorde this time, instead of Taylor Swift’s 1989 which she had released earlier on very day of my discharge, 10/27/14.  When I listened to that album driving along Parker’s Mainstreet it was like coming alive all over again.

He’s still holding my hand.  And he is sober now, too.  The Gospel is hard to resist when it looks this good, I guess.

In the New Story we’re the Love Hulks who can have adult conversations without manipulating, and discipline a child without shame.

The Santa wasn’t real, or even great.  But he was everything we needed.  I don’t know if God is real, in the sense that Americans like to imagine.  And “great” isn’t the first word that comes to mind when I look back over the last twenty-nine years, or since election day.

But I’ll be damned if God as Love isn’t everything we need.  Thank you Parker Valley Hope, for helping us remember.