Daddy found her gray in bed.

When I try to remember the night of Ellen’s stroke those are the only phrases I can pick out of the wreckage.  Just a few months before coaches photographed her wearing a soccer jersey after practice.  Now she is half-naked in a helicopter on life support.

A routine procedure that helped release some of the pressure under her skull made her tired so Daddy took Ellen home to rest.  Later that afternoon, when he noticed the nap lasted a little longer than usual, he found her cold and gray underneath the covers.

Mama called me and said she and Pat were headed down to the hospital from the car show they were enjoying.  Where are the babies, Fiona and Sean?  I can’t remember where the babies were.  This is when the fog starts to settle in; the sun doesn’t shine on this part of the story much longer, or very often.

But when it does, it’s blinding.

I call Mrs. Horan, my principal, because no fourteen-year-old girl wants to sit at home alone after she finds out her sister is probably dead.  She is Mama #3 and we sit on the beige velvet sofa while I rain tears all over her.

Here, the haziness thickens.  When did I visit her for the first time?  Was it that same weekend?  When she came out of the coma, was I there?  How many months did she spend at Northridge hospital rehabilitating?  Two, three, four?  How many nights did I spend putting the babies to bed?  Did I do homework?  Did I go to the beach?

One day, probably a year after the stroke, Mama and I were cooking and talking in the kitchen when we heard cloppy footsteps and Ellen’s new, high-pitched Julia Child voice approaching nearer.  She had walked from her sofa station to the kitchen—by herself.

Maybe this is a miracle?

The clouds part on Mother’s Day of 2003 when she gallops across the back yard chasing a soccer ball.

I remember the heavy wood & metal bell she rang when she needed assistance.  That god-damn bell.  One time she sounding off like a Christmas caroler in the room next to mine, so I took it away.  She cried when I grabbed it from her weak hands and placed it across the room.  I need to do math homework, sister.

I hope she doesn’t have to pee.

This is when I stop going to Daddy’s with her on the weekends.

Even when I have my period?  She begged telepathically.

I don’t want Daddy to change my pads.

It’s getting darker.  This isn’t normal.

“Ellen!  I need your help!  Use your legs, you’re going to ruin my back!”  She tilted her head up, looked at me with eyes that still pierce through the haze, and shook her head no.

A few weeks later we learned that the cancer came back, in a different area of her brain.

This isn’t a miracle.  This is torture.  You brought her back just to watch her flail around for a few more months?!  You’re not a Good God.  You’re the worst.

“There are new treatments available now.  They might add another year to her life.”

“No.” Her broken voice sounded so clear.

She shined like Moses after his adventure on Mt. Sinai.  The heavens opened and her effulgence burned away all the fear—the prophet had spoken.   It was time to go.  God bless my parents for letting their thirteen-year-old daughter RSVP yes to God’s invite Home.  I wanted to rip the invitation up, because who wants to watch a sister die? 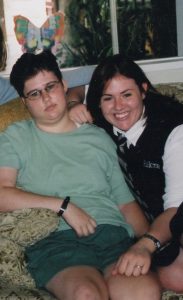 I don’t blame you.  Anyone who looks this miserable deserves relief.  If there’s a party waiting for you somewhere you need to go.

In the elevator I sang her a silly song about fluffing baby powder on her behind and she laughed.  When the doors floated open I ran to those tall cement minions that keep cars away from pedestrians and leap-frogged over them,  trying so hard not to cry.  Cutting my thigh at home would soothe all that raging and speak all those unutterable truths.  Robots don’t cry.

On the car ride home the fog settled back in.

Yes, Sweetie.  Because her third wish is to be free. 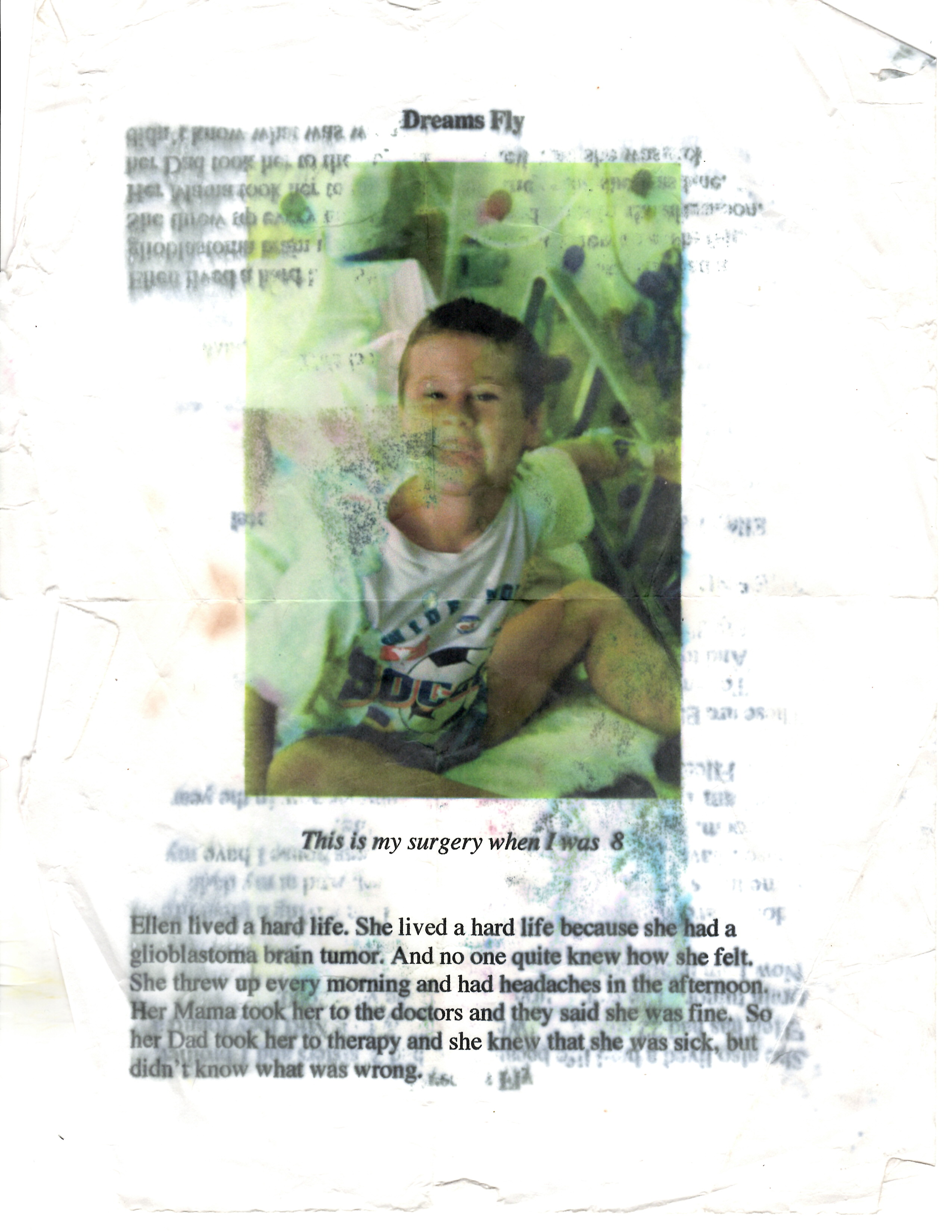 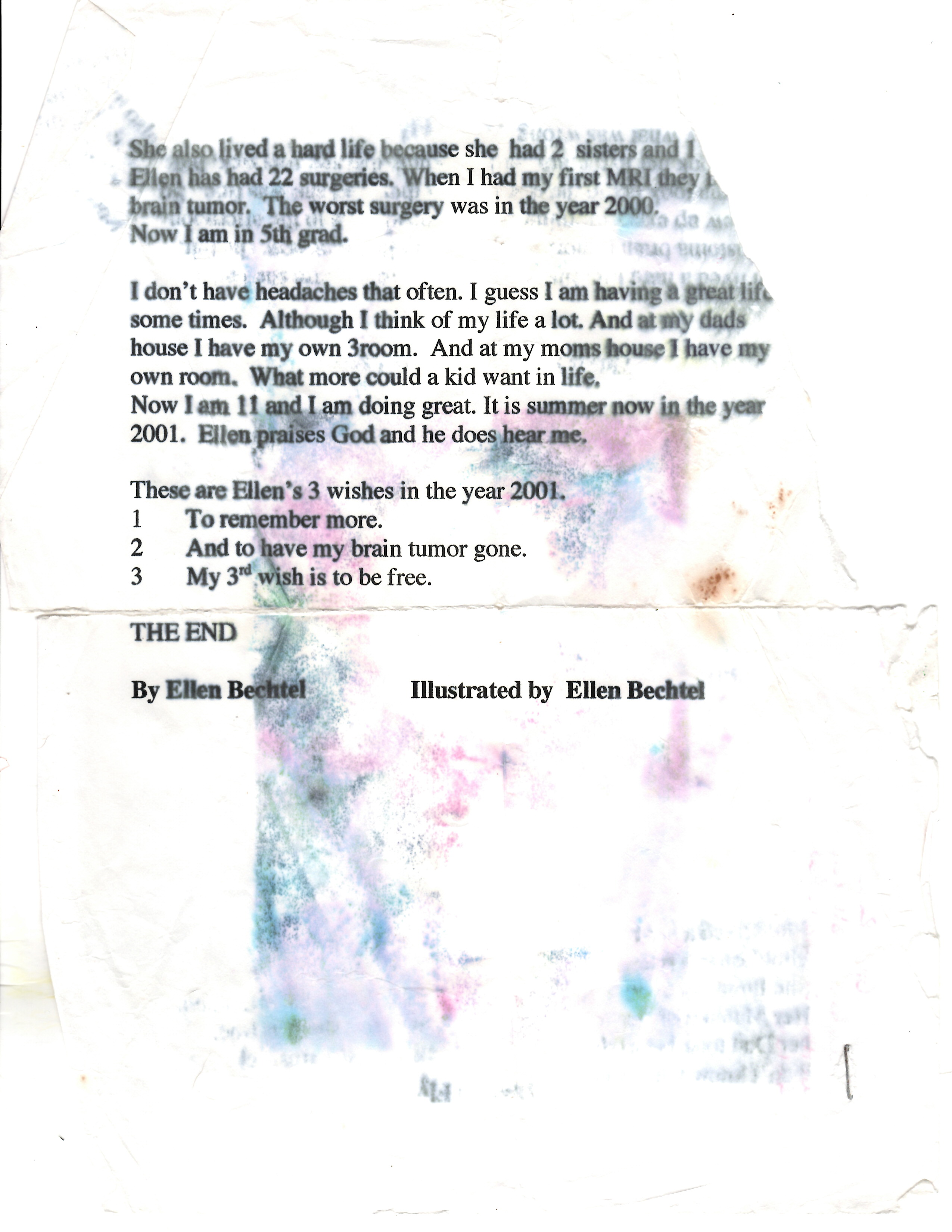